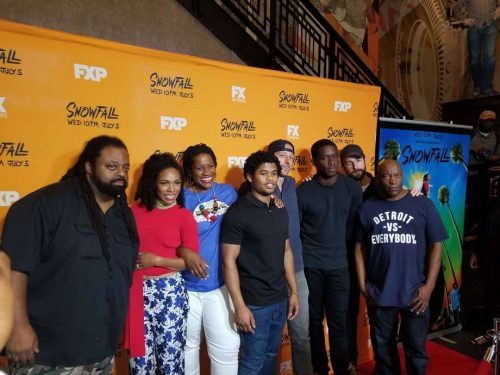 John Singleton’s new TV series, Snowfall made its Detroit premiere last night. Singleton and the cast joined viewers after the screening of the first episode for questions and photographs. The director, who made history exactly 26 years ago today with the release of Boyz In The Hood, shared his motivation for the show about the rise of crack cocaine in Los Angeles. As a native of South Central Los Angeles, Singleton wanted to revisit the past and present the drug epidemic because of its long-term effects still visible today. He recalled how the drug destroyed relationships between young people and the elders evidenced by the way the former once respected their older neighbors until they began to instill fear in them. The cast included Detroiter Angela Lewis who plays the role of Aunt Louie and veteran actress Michael Hyatt as Cissy Saint the single mother of Jerome and Franklin Saint. Damson Idris is one of the story’s focal points as Hyatt’s teenaged drug-dealing son. Idris spoke briefly to Kick Mag about drawing from his personal experience for the role and said that his hometown of Peckham, England is the “British equivalent of South Central.” When asked about learning to speak American dialect for the role he stated his challenge:

“Not making it comical. It was really important to me to sound like a real person. When I use to practice the American accent when I used to I was in London I use to look at people like Kat Wiliams and Eddie Murphy so I kind of had this template but when I started learning how to play Franklin I looked at more serious actors like Denzel Washington so it was definitely most difficult transitioning to an American accent and doing it just normal.”

Singleton emerged as one of the hottest young filmmakers when he debuted Boyz In The Hood which was also a return to his neighborhood but Snowfall has a different feeling even though there are similar timelines. Snowfall does not focus solely on family ties but a few different stories that intersect at the drug trade. Singleton created the show with Eric Amadio and Dave Andron and he expressed the importance of making a show that was not so downtrodden as to depress viewers but being careful not to glamorize the events. Snowfall is already doing well in the ratings game and is on its way to becoming one of the most memorable shows to debut this summer.

Snowfall airs on the FX channel Wednesday night at 10 ET.